Google Sheets has a built-in function called ImportXML which will import pieces of structured data from a webpage to a Google Sheet. You can use this function to import almost any publicly available information (unfortunately you can't use it with websites that you have to authenticate to).

Here's a question we've heard from customers in the past:

I manage multiple Twitter accounts but they’re all for different parts of the same company. Instead of displaying a individual Twitter Follower Count widget for each of my different accounts, I want to show the total number of all our Twitter followers in one widget.

The answer is to use the Google Sheets function, ImportXML.

In this article we’ll work through a similar scenario and explain how to use the ImportXML function of Google Sheets to import how many likes our Facebook page has and how many followers our Twitter page has. This function doesn't update on its own by default so we've written a script that we'll explain how to adapt to ensure your data is kept up to date.

Syntax of the ImportXML function

The syntax of the ImportXML function is:

URL
The URL of the page to examine, including protocol (e.g. http://). The value for URL must either be enclosed in quotation marks or be a reference to a cell containing the appropriate text.
query
The XPath query to run on the data given at the URL. Each result from the XPath query is placed in its own row of the spreadsheet.

How does the ImportXML function work?

We recommend working through the first 4 chapters of this blog post as it will give you a really good basic knowledge of reading source code and interpreting HTML, XPath and the ImportXML function.

We are aware that there are a few screenshots missing in Chapter 4 of the blog post, but this shouldn't affect the overall learning.

Once you've got your head around these things, come back to this article and we'll explain how you can use your newfound knowledge to the benefit of your Geckoboard dashboard.

In a web browser:

In a web browser:

Unfortunately, the Google Sheets ImportXML function won't automatically update from the source, even if the data on the source webpage is changed. This isn't particularly helpful so we've written a script that you can adapt to update your imported data every minute, even when the Google Sheet is closed.

these next steps do not follow on from the examples above and you can disregard these examples now.

Please open a new Google Sheet to work through these next steps.

In case you're wondering why we're adding a random number to the end of our URL, it's because otherwise the website will be cached and the function stops importing the latest data.

Step 3: Set up a Trigger

The Geckoboard dashboard is now displaying the information found in Cell C4 of the Google Sheet - our total Twitter and Facebook followers. 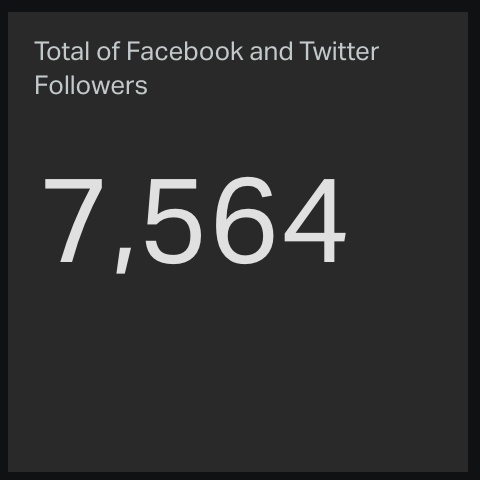 We've found that a few times a week, a server error will occur on Google's end and the script will fail to run. By default, you'll receive an email to notify you that this has happened. Considering the script runs every minute of the day which totals 1440 times, a few times a week is nothing to be concerned about.

Was this article helpful?

Awesome! 👍 Thanks so much for your feedback!

Sorry about that! Start a conversation now.