If you're comparing the data on Geckoboard against a report in Insights and it doesn't match up, first of all, make sure your dashboard's timezone is set correctly.

Zendesk has a variety of reports, some calculated within the App itself (i.e. the Reporting Overview) and some others calculated through its API (i.e. Insights reports).

Generally speaking, Geckoboard's metrics are built and calculated in a similar way to Insights reports, which means we both share a few discrepancies with the Reporting Overview.

Due to these "known" discrepancies, if you wish to compare the data on Geckoboard against Zendesk's, we recommend comparing against Insights exclusively.

There are a couple of additional technical nuances you should take into account:

Regardless of the source, Zendesk reports are either entirely or partially static (as opposed to being live data). This has twofold implications on the range and data freshness.

Let's say you want to know the number of tickets Solved in the last 7 days.

If you look at this metric in Zendesk's Reporting Overview, the last 7 days doesn't include Today.

The report below was taken on 4 July (and includes data from 27 June, until 3 July):

If you look at this same metric in Zendesk's Insight reports, Last 7 days translates to a range of days starting 6 days ago and ending Today (from 28 June to 4 July – following the same example as above). The latter is exactly how Geckoboard calculates Past 7 days.

The difference here is that Insights reports refresh on average every 1.5 hours (if you're on an Enterprise or Elite plans) or every 24 hours (if you're on a Professional plan) while Geckoboard's refresh every 10 minutes which means that Geckoboard could be showing 82 tickets solved while Insights still shows 80 (assuming two tickets were solved in the past hour or so).

Zendesk calculates the score as the percentage of good satisfaction responses out of the total satisfaction survey responses. According to their documentation:

The total number of satisfaction responses is the count of ticket IDs determined by satisfaction survey change WHERE ticket satisfaction score is Bad or Good AND deleted tickets are not included AND ticket status is Solved or Closed.

We believe that using all tickets with a satisfaction score to calculate this metric is more accurate and inclusive, but if you wish to apply Zendesk's methodology you can apply a filter to remove tickets with status New, Open, Pending and Hold from the score. 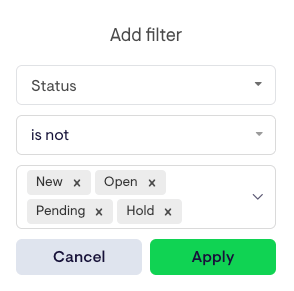 Adding a "status" filter to the Satisfaction score requires several API calls. Depending on your ticket volumes it could take a considerate amount of time to be calculated and potentially use up a big portion out of your API rate allowance.

Was this article helpful?

Awesome! 👍 Thanks so much for your feedback!

Sorry about that! Start a conversation now.

Ready to create your own dashboard?

Get started for free

Still have questions? Get in touch.